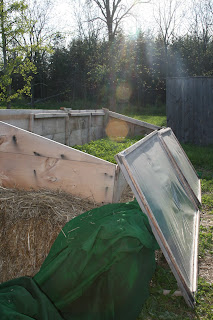 Many of you may have seen our hot bed in the yard in front of the greenhouse. It was a great home for our peppers after they were kicked out of the greenhouse to make room for other seedlings. We made the hot bed the end of March with fresh horse manure inside of the straw bales. When the manure heated up it went up to as high as 16o degrees F. We waited for the temperature to drop to around 100 degrees F. before it was safe to put the trays of pepper plants in over it. We covered the wooden frame with plastic covered frames on cold days and at night we covered the frames with the green compost cover to hold in the heat. The other advantage was that when we removed the lids in the day time the peppers became accustom to the direct daylight.

Thanks to Carey Wood we have another rhubarb recipe to share:

Prepare pie crust according to pkg. directions for 2 crust pie or make homemade pastry for 2 crust 9″ pie. Heat oven to 400Ff. In large bowl, combine all filling ingredients. Toss lightly. Spoon into crust-lined pan. Top with second crust. Seal edges and flute. Cut slits in top crust. Bake at 400 F. for 40-45 minutes or until golden brown. Cover edge of crust with strips of foil after 15-20 minutes of baking to prevent excessive browning.